Injured Victims of Trucking Accident Due to Negligence

Due to the nature of a trucking accident, the injuries are often very severe, unfortunately. If you, or a loved one, have a personal injury claim, do not settle the claim until the extent of your personal injury is known and the condition of your injury has stabilized. It is usually best to wait until you are finished the medical treatment. It has been said:

There is no heartbreaking situation more than to settle a personal injury claim with an insurance company and later find out that you needed more treatment at a greater expense than you first thought when you settled. Trucking accidents are often much more severe and result in injuries that may not at first be obvious until the treatment has been started or reaching the end. 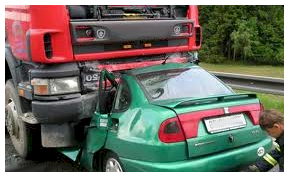 Semi-trucks and other commercial vehicles make up a large percentage of traffic between Los Angeles and Vancouver BC, throughout Oregon and Washington state,including the often congested I-5 and the I-215 that goes around and avoids downtown Portland. These are major artery for transportation between Southwest and Northwest. In fact, Portland OR serves as a major transportation hub for several large trucking companies that are located at the Port of Portland delivering goods to North America.

Just like cars, trucks get into accidents, but often with much worse results. The sad truth about commercial truck and semi-truck accidents is that the injuries are fatal or the injured often sustains traumatic. Most often the accident is caused by the truck driver's negligence.

There are a few other things to keep in mind, which involve being represented by an experienced truck accident lawyer for your injury claim. Right after an accident, a good insurance adjuster for the at-fault driver will immediately go out and take photos, and get witness statements. Insurance adjusters are trained to make a record and preserve evidence. They often have recorded statements from everyone involved, including you. I cannot tell you how many times I have had an injury accident case come in where the other insurance adjuster took pictures of my client’s car, which was rear-ended but not damaged much, and yet no one seems to have any pictures of the car that did the rear-ending, which was totaled. Your own insurance company invariably doesn’t take those photos because they don’t feel they have to build a case, since you were not at fault.

Driving in unsafe weather conditions, specially high wind for a heavy truck can be fatal for other road users

Truck driver leaves inadequate space between themselves and your vehicle