Jim Sellers is regarded as one of the state's top-rated personal injury attorneys with valuable experience in representing victims of commercial and semi-truck accidents. Mr. Sellers has represented successfully hundreds of victims just like you and is recognized by his peers as having demonstrated the highest ethical standards of performance and professional conduct.

When you hire Mr. Sellers to represent you for your truck accident claim, you receive the full attention of a law firm with 40+ years of experience that works to get you the maximum compensation you deserve. All the staff will work hard to fight for you and protect your rights throughout your entire case to answer your questions and provide you with the backing of one of the best law firms in Portland Oregon area. 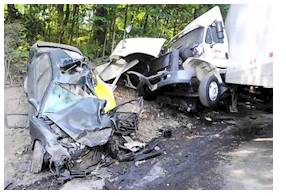 Sellers Law Firm represents personal injury victims of negligent truck drivers in Portland Oregon, and Surrounding areas. Semi-trucks and other commercial vehicles cause awful injuries and fatalities and negligent drivers and irresponsible companies that push drivers harder and harder to drive longer hours to increase profits at the expense of injured victims need to be brought to justice to make sure they avoid such negligent behavior in the future.

The sad truth about commercial truck and semi-truck accidents is that the injuries are fatal or the injured often sustains traumatic injuries that are much more severe than car accidents. Most often the accident is caused by the truck driver's negligence and/or irresponsible companies that they work for..

There are a few other things to keep in mind, which involve being represented by an experienced truck accident lawyer for your injury claim. Because the insurance policies for semi-trucks and commercial trucks often amount to hundreds of thousands of dollars, the insurance company will aggressively defend these cases and do whatever they can to limit their liability. Right after an accident, a good insurance adjuster for the at-fault driver will immediately go out and take photos, and get witness statements. Insurance adjusters are trained to make a record and preserve evidence. They often have recorded statements from everyone involved, including you. I cannot tell you how many times I have had an injury accident case come in where the other insurance adjuster took pictures of my client’s car, which was rear-ended but not damaged much, and yet no one seems to have any pictures of the car that did the rear-ending, which was totaled. Your own insurance company invariably doesn’t take those photos because they don’t feel they have to build a case, since you were not at fault.

Semi-Truck and Commerical Truck Accidents on our roads

Most deaths in large truck crashes are passenger vehicle occupants. Occupants of cars and other passenger vehiclesare more vulnerable in a truck accident since trucks often weigh 30 times as much as passenger cars and are taller with greater ground clearance, which can result in smaller vehicles underriding trucks in accidents.

Nearly 530 pedestrians, bicyclists or motorcyclists died in 2012 as a result of truck accidents

Our experience in handling semi-truck accident claims will be critical to your case. This includes our knowledge of the special laws regulating semi-trucks and their drivers, as well as our ability to locate the potential of "multiple policies".

Our law firm will properly survey a truck accident scene, secure proper holds on the vehicles involved, and re-create the collision by working closely with reconstruction specialists when necessary. The preliminary work will be critical to make sure you win your case and get maximum compensation for your injuries. Our law firm has extensive experience and knowledge of the special laws regulating semi-trucks and commerical trucks, as well as multiple policies and negligent driver cases.